skip to main | skip to sidebar

Many of the names and some of the descriptions in this blog have been changed to protect the guilty.

I had always assumed that ALL the older guys who hung out in The Center in the early to mid-1960s, prior to the Circle Gang in 1968-1969, were called the Motleys—a group that I thought was also known as the Razorbacks or the “Big Acres,” as they were referred to in Jim Coleman’s book The Circle. But I was wrong: the latter
three groups were in fact three separate crews.

That’s the problem with not having firsthand knowledge of a situation. For example, I received a good amount of social media blowback from my post on Sixteen Acres "Gangs" of the 1990s. “What bullshit,” someone wrote. My source for the post had known a lot of particulars of these groups, but not down to every last little detail, so people complained about a couple of alleged inaccuracies, even though they didn’t pinpoint them. One of the complainers emailed me and offered to make some corrections, and I took him up on it, but he never got back to me.

Yes, I’m always looking for a good story to tell. But I’m also interested in telling the truth. So when someone on good authority and with a good memory is motivated to inform me of the precise nuances of a scenario from years ago, I’m all ears!

Now where were we? Oh yes, the original groups of Sixteen Acres Center—and from a much earlier period: the mid-1960s, before the infamous Circle Gang arrived on the scene.

So here they are, straight dope from a guy who was very much a part of the scene. The groups consisted of:

Who did I get this info from? A guy, let’s call him Doug (nicknamed D-Truck and D-Beach), who used to hang with the Acres boys. He said the Razorbacks gave them the nickname the Glue Boys because the Acres boys should “stick together like glue” in fights—even though Doug admits his group didn’t stick together very well when the punches started flying. The Acres boys or Glue Boys used to party a lot with the OBGs.

Although there were different cliques and subgroups at The Center, they existed in relative peace with one another. “There was a lot of interchange amongst these guys—some of them moved between groups,” he wrote.

The Circle Gang (pictured below) was made up of younger youths. However, by 1971, there was some consolidation between the above groups, forming one group of guys and girls known as “The Acres.” A common thread between all these kids was hanging out at the original Sixteen Acres Friendly’s, which was in the A&P shopping center next to Acre Drug. When Friendly’s closed that restaurant and moved over to its Wilbraham Road location (across the street from what is now Johnny Mac’s Liquors), the hangout scene just wasn’t the same.

The old Friendly's is pictured here: 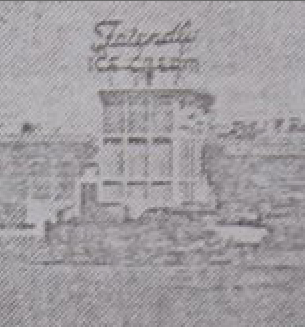 Although this post focuses on an earlier period, several major events happened in 1971. On May 20, 1971, Danny Rurak, one of the Razors, sped away from Friendly’s on his motorcycle and got in a fatal accident when he hit the curb on Tinkham Road near Gate of Heaven Cemetery.  “I remember the date because it was Ascension Thursday,” wrote Doug. Rurak’s older brother was one of the Glue Boys. After the funeral, there was a big party over Butch V.’s house on Rosewell Avenue in Pine Point. Butch was part of the “other” unnamed group—his brother hung around with several Acres groups at any given time.

“We did not plan crimes—just underage drinking,” wrote Doug of the Glue Boys. Some gangs did, however, break-ins etc. The Circle Gang was notorious for this—in fact, in 1971, Circle members Mat Elroy and Mickey Callahan (their pseudonyms in the book) were busted for a series of armed robberies of convenience stores.

According to one source, the Motleys—the motorcycle enthusiasts of The Center crowd—did burglarize this house, reputed to be the oldest house in Sixteen Acres, two houses south of “the falls” on Paker Street:

“The Motleys were of different ages and not really part of my group,” wrote Doug. The late Skip LaFleche of the Motleys gained some notoriety back then when he drove his motorcycle through the Friendly’s front door and out the back door. Friendly’s manager Richard Kretchmar (the teens called him “Crotch Man”—known as Mr. Crepeman or “Old Crappy” in the book The Circle) put up with a lot of antics with these kids.

The Motleys would also torture a motorcycle cop, Sgt. Sibley, by burning rubber and popping wheelies on Parker, but having previously dumped motor oil on half of the corner of Sunrise Terrace (no traffic light at the intersection back then), so when the fleeing Motley turned the corner on the unoiled part, Sibley hit the slick and went flying.

Sibley is pictured on the left below: 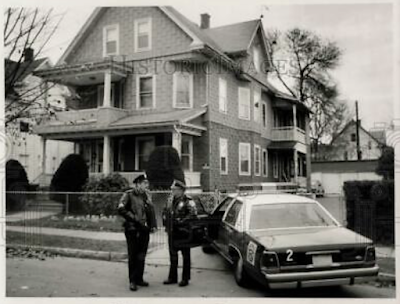 At one point the Motleys worked at the Flaming Pit restaurant in Eastfeld Mall. Their nicknames included Crazy Bob, Muppy Murphy, Frank the Claw, the Old Man, Flash, Shrewd Trader, and Ched Edmunds.

Although The Center groups fraternized with one another and got along, there was a wild card in the mix. Mike F. was from Abbott Street in East Forest Park but hung around with the OBGs until they kind of dissolved (or scattered to other Acres groups) in 1968. Mike F.’s father was a rather prominent bail bondsman who owned a restaurant on Federal Street, and his uncle may have been involved with the Springfield crew of the Genovese crime family.

Whether or not Mike F. used these family connections to increase his rep is neither here nor there, but he “was not liked by anyone,” wrote Doug. At one point in 1971, Mike F. went to the Sixteen Acres Friendly’s because of an unknown beef, and he beat up Bob F., who was both a Motley and a Glue Boy. After a couple of weeks, when Mike F. returned to Friendly’s to start even more trouble, he was wolfpacked by some of the younger guys—“Freaky Craig” Wyland, who was both a Motley and a Glue Boy, Dan Rurak, a Razorback, and Danny N., also from the Razorbacks. They kicked his ass. This may or may not have ultimately led to a confrontation between kids from the East Forest Park Friendly’s and The Acres: 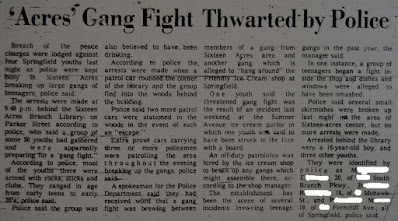 “Mike F. was the biggest controversy in Sixteen Acres,” wrote Doug. However, the late Mike F. ultimately redeemed himself, somewhat, by getting sober and becoming a drug counselor.

By the early- to mid-1970s it seemed that there were fewer youths hanging around the Sixteen Acres Center parking lots because Friendly’s had moved and police started cracking down on people loitering there. By the mid-1970s, people hung out at The Logs (by the parking lot at the field behind the Greenleaf Community Center), Elsden's Field (off Parker Street across from Greenleaf Park), Foster's Field next to Venture Pond. And there was the Rail Gang at the end of Blanche Street.

Another example of the “de-Center-ized” locations of the Sixteen Acres groups by the early 1970s: Doug’s younger brother hung around “The Fence” on the corner of Old Farm Road and Emerald with a lot of “the younger guys” from 1970 to 1972.

I do, however, recall in the summer of 1981, behind the “new Friendly’s,” you could drive your car out of the parking lot, over some grass, and into a pathway in the woods. A guy I knew from Sunrise Terrace and his friends called it the “New Circle.” I partied there a few times, but I just didn’t get the sense there was much hanging around in The Center as the 1970s rolled on—at least not the obvious “hanging out by your car in the parking lot” American Graffiti type of thing. That scene moved over to the Caldor’s lot at Allen and Cooley.

Besides, in the 1970s, if you were old enough, you could go to the “Parker House” (actually called the Parker Lounge), which was later renamed Jilly’s. 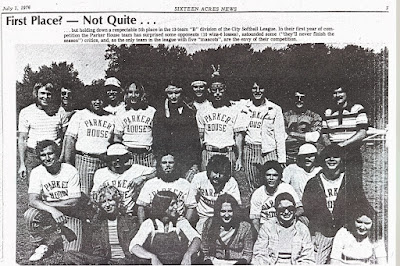 But I could be wrong. If I am, please let me know in the comments section or email me at hellsacres@gmail.com, because I want to GET IT RIGHT!
No comments:

Spitting to All Fields, Part 4:
The Flaming Pit Restaurant

Spitting to All Fields, Part 2:
Throwing Snowballs at Cars

The Ruins of Laughing Brook, Part 2

When Did Downtown Springfield Jump the Shark? Part 1

The Trail of Swears Leads to Eastfield Mall

The Ruins of Laughing Brook, Part 1

The Paving of Our Precious Pine Point Party Paradise

House of Television and Other Signs of the Times, Part 4

House of Television and Other Signs of the Times, Part 3

House of Television and Other Signs of the Times, Part 2

House of Television and Other Signs of the Times, Part 1

The Slink: The Acres' Heroin Phantom

The Great Wiffleball Fire of 1975

The Tinkham Road Woods and the Story of Pumpkin Head

The Singing Nun and the Great Poo Poo Scandal of 1969, Part 2

The Singing Nun and the Great Poo Poo Scandal of 1969, Part 1

Fear and Loathing on the Monkey Trail, Part 2

Fear and Loathing on the Monkey Trail, Part 1

Sixteen Acres: What's in a Name?

Death Match: George the Animal Steele vs. the Maebeth Womblies

The Fairlawn Cruise: Flirting With Disaster

Snowshoeing in the Swamp

The Art of Splash-and-Dash in Sixteen Acres

Pestering Poor Patricia Hale, the Witch of Sixteen Acres
NOT Coming Soon: A Drive-In Theater Near You