skip to main | skip to sidebar

Many of the names and some of the descriptions in this blog have been changed to protect the guilty.

Spitting to All Fields, Part 4 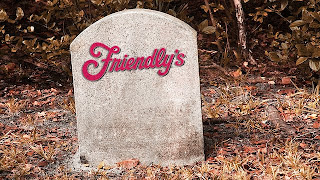 Happy New Year! The hangover from a year that had a tornado, a microburst, and a destructive October snowstorm also included another slap in the face. Say it ain’t so! The end of an era has come—the Sixteen Acres Friendy’s has been closed and shuttered. 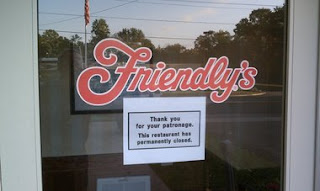 Below is the restaurant in better days. In the 1970s mobs of little leaguers descended on the take-out window after their games on Saturdays. 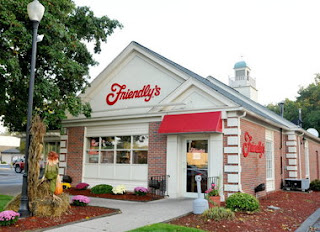 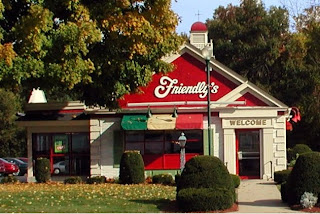 The take-out window was enclosed to better serve customers in the winter, and I heard it fared really well. Regardless, the establishment was lumped into one of 63 “underperforming” ones that closed in October as the corporation filed for Chapter 11 bankruptcy protection.

On January 9 another 37 Friendy’s stores experienced an unhappy ending, including the one at Allen and Cooley.

Of course, the first Sixteen Acres Friendly’s was in the site of today’s Ginger Blossom restaurant on Parker Street. That Friendly’s was open for business in 1956 next to A & P supermarket and moved to its Wilbraham Road digs in 1973.

The older Acres Friendly’s is immortalized in print in The Circle, James A. Coleman’s book about the Circle Gang of Sixteen Acres. The author uses pseudonyms to assure the anonymity of the people he was writing about, but let me be the first to tell you that the guy who drove his motorcycle through the front door and out the back door of that Friendly’s—one of the funniest references in the book—was none other than the late Earl “Skip” LaFleche. That stunt earned him a restraining order, according to his sister.

Taking Friendly’s place in that location was the Parker Lounge, which many called the “Parker House,” and some Acres booze hounds called “home.” That bar became Jilly’s in 1980 and closed some time in the 1980s. My memory begins to fade around this time: what else was in that space? A sporting goods store named Pro Sharp set up shop in 1996 and Ginger Blossom came in 2003. Can anyone fill in the blanks? 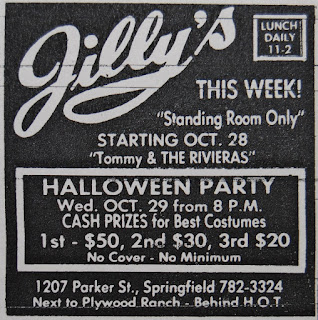 Below is the first Friendly’s in the country, which opened in 1935 at 161 Boston Road in Pine Point. 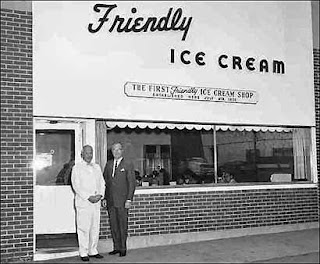 Now it’s a pizza shop (below). To take a peek at what the place looks like inside, check out Tommy Devine’s blog. 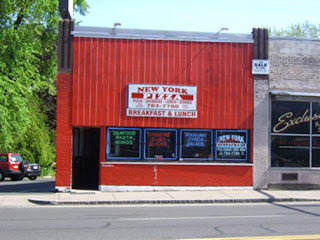 There was something about those Friendly’s waitresses in those figure-clinging polyester uniforms—sort of a tacky version of a French maid outfit, complete with the frilly neckline and apron. In Homer Simpson’s words: 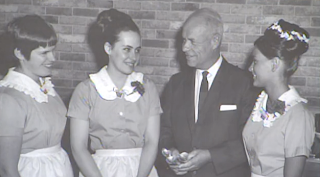 No, the earliest Friendly’s executives couldn’t disguise their leers. 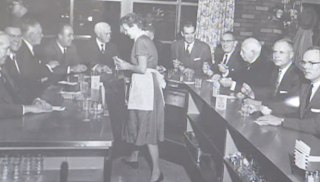 A friend of mine went out with a Friendly’s waitress and once insisted that she leave her work clothes on when they were about to bonk.

“No. I don’t think you want me to wear this,” she scoffed. “It’s disgusting. It’s got chili and ketchup on it. And ice cream all over the bottom. Ice cream stains everywhere. Gross.”

No. She didn’t understand. Food filth aside, he told her again with authority that he preferred her to leave it on, and then he whipped out his Big Beef. As planned, there was a happy ending.

“So,” I asked him, “what’s better—peeling that Friendly’s waitress uniform off slowly, or having her leave it on before you put the Jubilee Roll to her?”

The answer isn’t important. All that’s important at this point is my disturbing use of Friendly’s menu items to describe the penis. So it will stop. Now.

Still, I must inform you that when I Googled “Friendly’s waitress uniforms” and variations thereof to get a photo of a woman wearing the good old blue-and-white checker-patterned outfit, I couldn’t come up with much. 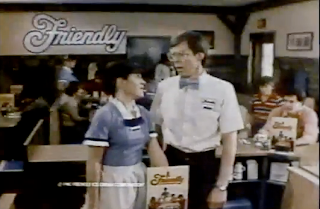 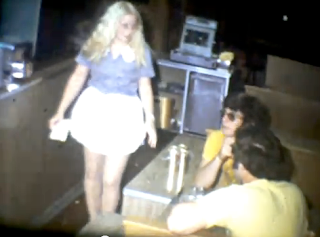 …but the cleavage never seemed to plunge much below the 1950s standard: 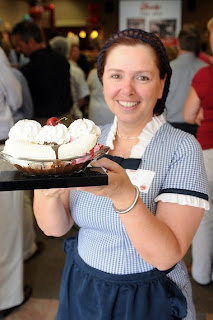 Anyway, across the street from the old Friendly’s, in the parking lot of the old Princess Parlor (now Johnny Mac’s Liquors), after the warmest November on record, the snowbank from the October 29 storm was still there as of November 30. 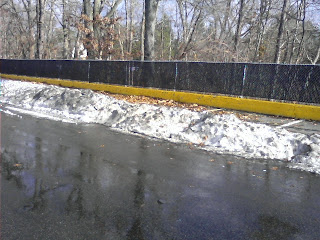 While we’re on the subject of long-gone eateries, how about these 1970s specials at the Eastfield Mall’s Flaming Pit? If you look at the fine print at the first ad below, there was also a Flaming Pit in South Hadley (!?) 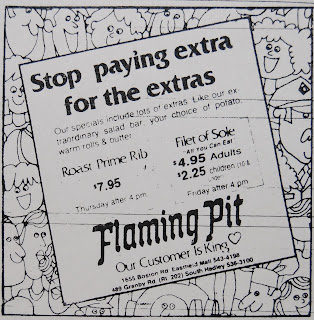 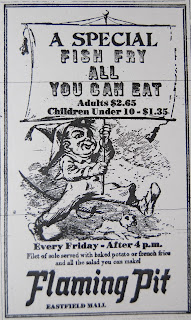 Oh, yes, the Flaming Pit. I can just feel those stucco walls now. How about those 1960s red globule candles wrapped in white fishnet at every table? One night my family took a neighbor to the Flaming Armpit and he proceeded to get crocked. After I remarked how cool the candle was, he kept bugging the waitress, asking her if he could buy it for me, and she kept telling him they weren’t for sale.

The next day I found it on our kitchen counter—he stole the dang thing! My mother banished the candle to our basement bookshelf, where it radiated funky coolness in front of our cellar’s knotty pine paneling for almost 15 years. When I came home from college on a break, I noticed it was gone. How could my parents have tossed it? I should have brought it with me to school. I couldn’t find a photo of one of these babies on the web, but, believe it or not, someone is indeed selling them:

The seller is All About Props, which provides décor for movies and plays. Hmm, I wonder how much the company would charge for just one of those suckers.

So, the candles are still out there, but where, oh where, is the Flaming Pit? I went to the mall, found the void where the little fountain was, and looked in the corner for the Flaming Spit, and found only American Eagle: 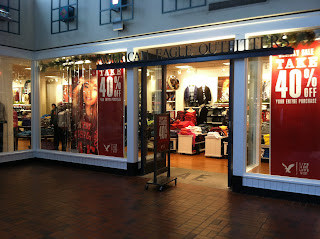 Supposedly, the Pit was the first restaurant in the area to have a salad bar, but Bonanza might have a valid claim to that distinction. 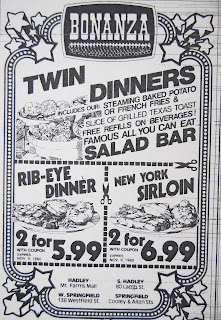 Then again, Burger Chef, which was the first fast food chain in the country to have a salad bar, was on Boston Road even before the Pit. 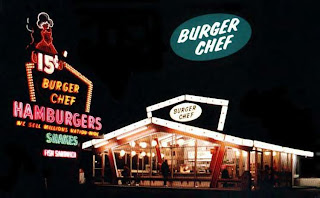 Hey, folks! Speaking of Boston Road yet again, I uncovered another photo of Russell’s on the web. 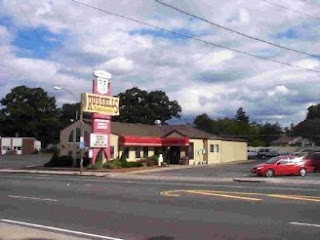 You can read Russell’s story in Spitting to All Fields, Part 1.

Let’s head down the road to the Ranch House. Hey, there’s Napoli’s parking lot on the right. Can you still pick up your pizza at Napoli’s through that window in the back? I doubt it.) So we continue to the RAUNCH House. In Spitting to All Fields, Part 2 you can read about the demise of this sketchy place, where at one time you could enjoy some “lodging,” seafood, country music, and hookers. 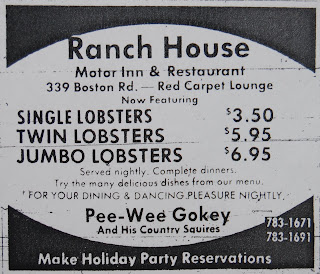 How about THANKSGIVING at the Ranch House? 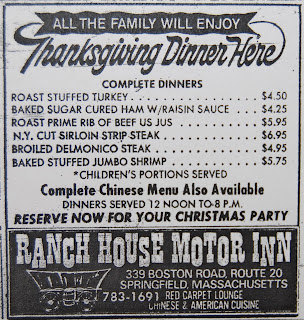 All right, back to the Acres. How about that old geezer that turned the old Breckwood Big Y into a drive-thru market in October? 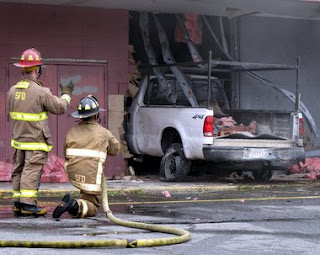 His truck started burning and then set fire to some furniture that was left over when the place was a Showcase Cinemas. 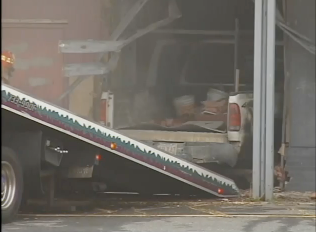 Because the accident weakened a support beam, the city’s code inspector had to check out the building, and there was speculation that the structure might have to be torn down. So far it’s still standing, remaining an eyesore to the neighborhood. This place has been vacant for years, and it looks like shit. Hey, I know what would liven things up at that shopping center: a casino!

Speaking of defunct supermarkets, where did you do your shopping in The Acres? A & P, Big Y, Jumbo or Popular Market? 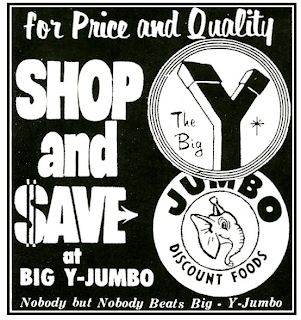 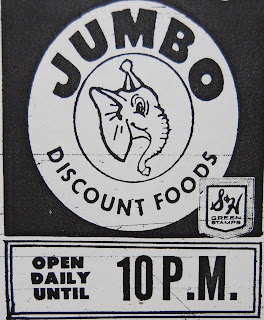 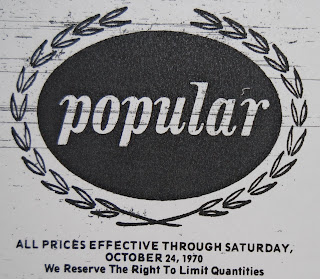 How many people remember when Jumbo burned down? It’s amazing when you quiz people—some don’t even remember the supermarket, which was in the Females in Training area (whoops, F.I.T. is now gone) in the Gateway Shopping Center (now the Breckwood Shoppes). The explosion and fire occurred on Christmas Eve in 1967. I was a wee lad of four at the time, but for many reasons I remember it so well: I had always liked the elephant on the sign; it’s obviously shocking as a toddler to see my first charred building; and I can readily associate the memory with Christmas that year.

Memory is a tricky thing. For example, I vaguely recall a “shooting” on our street: when I was nine years old a guy supposedly whacked a bullet with a stone and it shot him. Neighbors talked about it at the time, and maybe I read about it in the paper—maybe not. Over time, the story evolved into sort of an urban myth, as in, “This guy’s so dumb he shot himself with a rock.” Was it true? I began to have my doubts. The act would have been so moronic it HAD to be fiction, I reasoned. But lo and behold, I found the incident during an archive search (below). I whited-out his last name and street number to protect his identity. Did his parents eventually find a way to protect this guy from himself? Next time, point the bullet the other way, dipshit.

Honk if you remember Warehouse One! 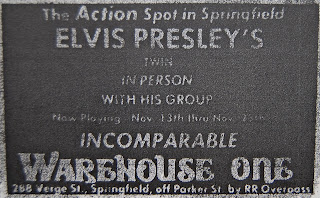 How about a 10-second road rage honk if you remember the Matador? 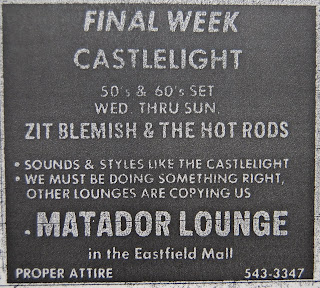 Zit Blemish and the Hot Rods has to be my favorite name for a band. But “proper attire” to see Zit Blemish? 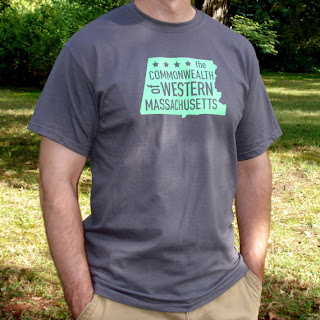 The old East-West divide. Do you support adding a seventh New England State? Western Massachusetts’ lack of political clout and its distrust for Eastern Massachusetts goes back more than 300 years, to Shays' Rebellion. Now you can voice your passion for secession with a t-shirt. We could claim the Quabbin Reservoir as our own! 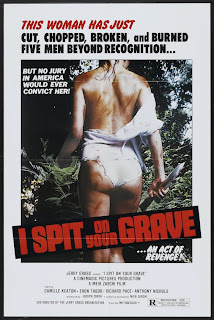 One last “spitting image,” and I might as well end this post the way I began it: with a grave. I remember seeing this awful movie at the now defunct Holyoke Mall Cinemas in high school. Did they actually do a remake of it in 2010? You gotta be kidding. Below is the original trailer:

"WE'RE GETTING THE BLOG BACK TOGETHER."

A two-year break has been LONG ENOUGH! Welcome back, Hell's Acres readers.

Spitting to All Fields, Part 4:
The Flaming Pit Restaurant

Spitting to All Fields, Part 2:
Throwing Snowballs at Cars

The Ruins of Laughing Brook, Part 2

When Did Downtown Springfield Jump the Shark? Part 1

The Trail of Swears Leads to Eastfield Mall

The Ruins of Laughing Brook, Part 1

The Paving of Our Precious Pine Point Party Paradise

House of Television and Other Signs of the Times, Part 4

House of Television and Other Signs of the Times, Part 3

House of Television and Other Signs of the Times, Part 2

House of Television and Other Signs of the Times, Part 1

The Slink: The Acres' Heroin Phantom

The Great Wiffleball Fire of 1975

The Tinkham Road Woods and the Story of Pumpkin Head

The Singing Nun and the Great Poo Poo Scandal of 1969, Part 2

The Singing Nun and the Great Poo Poo Scandal of 1969, Part 1

Fear and Loathing on the Monkey Trail, Part 2

Fear and Loathing on the Monkey Trail, Part 1

Sixteen Acres: What's in a Name?

Death Match: George the Animal Steele vs. the Maebeth Womblies

The Fairlawn Cruise: Flirting With Disaster

Snowshoeing in the Swamp

The Art of Splash-and-Dash in Sixteen Acres

Pestering Poor Patricia Hale, the Witch of Sixteen Acres
NOT Coming Soon: A Drive-In Theater Near You